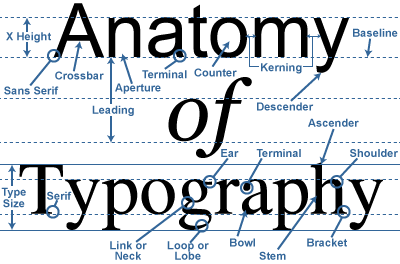 Below is an explanation of the terms used to describe the anatomy of typography, as depicted in the graphic:

Ascender - an upward stroke, which is part of a lower-case letter, that extends above the x-height.

Baseline - an invisible line on to which the letters of a typeface sit.

Bracket - a curve or wedge-like object that connects a serif to a particular part of a letter. Brackets are not used with all serif typefaces.

Counter - the area found in some letters, such as 'n', 'o' and 'g', that is either fully or partially enclosed.

Crossbar - a horizontal stroke that joins parts of a letter, as with 'A' and 'H'.

Ear - a small stroke, sometimes found on a 'g', that projects outwards from the right-hand side of the bowl.

Kerning - the horizontal space found between two letters, such as that found between 'o' and 'm' or 'm' and 'y', in the example shown here.

Link or Neck - a stroke that joins two distinct parts of a letter, for example, with the 'g' shown in the graphic here, where the link joins the upper a lower bowls.

Loop or Lobe - the enclosed or partially enclosed bowl of a letter that resides below the baseline, such as with the 'g' shown here.

Sans Serif - a typeface that does not have small projecting strokes from parts of the letters. The word 'Anatomy' in the graphic shown here, is an example of a sans serif typeface.

Serif - a typeface that has small projecting strokes from parts of the letters, as with the word 'Typography' shown in the graphic here.

Shoulder - a curved stroke, found in letters such as 'h', that project outwards from the stem.

Stem - a vertical stroke that runs the full height of a letter.

Terminal - the end of a stroke, be it straight or curved, that does not have a serif.

Type Size - the height of a typeface, from the top of capital letters and ascenders to the bottom of descenders.