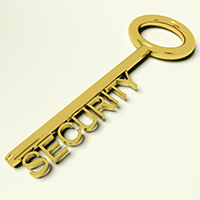 Encryption is the process of transforming, or encoding, readable data, often referred to as plaintext, into an unreadable form, called ciphertext. Decryption is the reverse of this, where ciphertext is decoded, or transformed, back in to plaintext.

Encryption is widely used by both organisations and individuals to protect sensitive data stored on computers, servers and mobile devices such as phones and tablets. It is also used to protect information being transmitted over the internet, between a browser and a server.

There are two main components to encryption, an algorithm and a key, which are used in combination to encrypt and decrypt data. The algorithm can be thought of as like a padlock, which secures the data, whilst the key gives the ability to unlock the padlock and therefore access the data.

Encryption can be split in to two categories, Symmetric and Asymmetric Encryption.

Other examples of Symmetric Encryption algorithms include:

The most widely used Asymmetric Encryption algorithm is Rivest-Shamir-Adleman, or RSA for short. With this algorithm both the Public and Private Keys can potentially be used to encrypt data and the corresponding Key can then decrypt it. This provides a means to show authenticity of a transmission. A transmission can be sent as described above, but also include some data encrypted by the Private Key of the sender. The receiver can then decrypt the message as before and then use the Public Key of the sender to decrypt the additional piece of data, therefore proving the origin of the transmission. This is known as a Digital Signature.

Other examples of Asymmetric Encryption algorithms include: